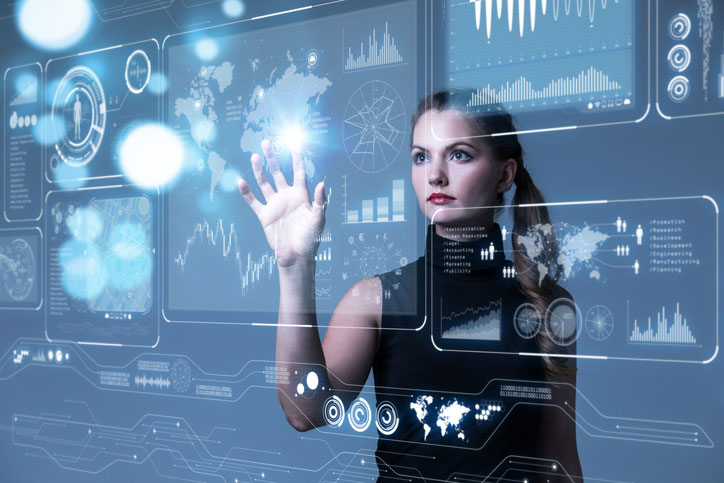 In the tense opening scene of the Steven Spielberg/Tom Cruise film Minority Report a handful of police officers race desperately to track down a murderer and arrest him… before the actual murder occurs. PreCrime, the name of the unit responsible for finding and stopping these incidents before they occur, operates off the predictions of three psychic precognitives, but their daily work is awash in data, generated from city-wide optical sensors that track individuals step-by-step, to GIS databases and records systems accessed with the sweep of a hand.

More recent fictions have played more directly on the big data angle. In the television show Person of Interest, a supercomputer given access to all U.S. government databases is shown as being able to predict terrorist incidents and other violent crimes in advance. While the government uses the information to focus on terrorism, the creator of the program running on the computer uses the analysis to prevent other serious crimes that are predicted by the data.

With big data analysis predicting everything from shopping habits to pregnancy to disease, how close are we to the world shown in Minority Report or Person of Interest? The answer may be: closer than you think.

PredPol Predicts Crime Before It Happens

PredPol is a California company founded in 2012 that turns PreCrime into something close to reality. Based on an algorithm developed by UCLA professors working in conjunction with the Los Angeles Police Department in 2011, the company now works with dozens of agencies around the world to analyze crime statistics and provide target areas for enhanced police patrols.

PredPol has been proven under fire. The algorithmic predictions of increased criminal activity have been around twice as accurate as predictions made by human analysts. More importantly, enforcement operations based on PredPol predictions have been successful at driving down crime. In Los Angeles, property crimes in the Foothill area of the city dropped by 12 percent after predictive policing was put into practice there.

Since then, stories from impressed police officers and researchers from England to Albuquerque have come to light. As PredPol garnered press attention, other researchers with other algorithms each pressed their case with police departments – and many of these agencies are showing a lot of interest.

The Future of Predictive Policing is More Concerning Than the Present

For all of PredPol’s successes, the fact remains that it is a predictive mechanism based on only three pieces of information:

No personal data is incorporated into the predictive algorithm.

As accurate as it has proven with only those three pieces of data, the question inevitably becomes: can even more accurate and useful predictions be made by incorporating more data into the calculation?

Currently, PredPol is most effective for property crimes. Those are common violations which have reams of historical data focused on the three items that PredPol evaluates, which gives the algorithm a lot to chew on. But other types of crimes may not be as dependent on those particular data points. Researchers believe that variables such as road networks, weather, and proximity to liquor stores can also influence some criminals. Incorporating those elements into predictive policing algorithms could open up even more effective and widely applicable crime prevention techniques.

But the possible inclusion of individual criminal records and real-time data sources such as directional microphones (designed to detect gunshots, but also able to intercept other sounds) and closed circuit television cameras sets off alarm bells with civil libertarians. The presumption of innocence in the American justice system can become quickly compromised by the promises of high-tech detection methods.

If You Thought You Were Safe From Predictive Policing, Think Again

Lest you imagine this development will only affect previously caught and convicted criminals, consider that some police departments already monitor social media sites to attempt to predict the location of parties that may get out of hand. It’s not outside the realm of possibility that enterprising data scientists, working from public sets of very personal data (such as those available via Facebook, Twitter, or Google) will develop algorithms that accurately predict domestic violence or child abuse.

Like any well-designed big data analysis, this prediction could very well be made long before the individual involved even contemplates such actions… just as you may be predictably predisposed to buy a certain brand of sunglasses by your other shopping habits and cultural background, you may be predisposed to beating your domestic partner or children.

And as with Minority Report, the quandary then becomes when and how those predispositions should be acted upon. Many arguments can be made supporting a moral right to prevent terrible crimes. But steep philosophical questions also have to be raised about whether individuals can be accountable for predictions that may or may not come to fruition.

There is also the argument that predictive policing does little to undermine the root causes of crime. These are sociological issues that have their own big data options for analysis, but that are not generally incorporated into policing strategies. This leaves predictive policing open to charges of racial and other socioeconomic bias, concentrating enforcement in already disadvantaged and sometimes persecuted populations. Some cities, notably Oakland, have turned away from the practice for these reasons.

Although the algorithms may predict crime among those populations accurately, they could also effectively create positive feedback loops. One of the greatest predictors of likelihood of criminal offenses is past incarceration. If the criminal justice system fails to adapt to the effects of predictive policing with deviation and treatment programs, it could simply ensure that areas that are already a focus for criminals are soon packed with even more criminals, simply by virtue of more crimes being identified.

Or the opposite effect can also occur. The fact that the base data for predictive policing relies on reported criminal activity can lead to under-enforcement in areas where a lot of crime occurs, but few reports are made. And in wealthy areas, where residents are likely to call the police even for minor matters that may not otherwise draw attention, excessive reports can draw enforcement activity that is largely wasted.

Garbage in, garbage out is an issue in any application of data science, but the real-world consequences of it in law enforcement are troubling. Data scientists exploring the limits of predictive policing services will have to tread carefully as they work to reduce crime while safeguarding civil liberties.